Restoring a Royal Enfield Meteor Minor Fuel Tank Intro
For most of my life i had quite short hair. High and tight -marine corps style. I used to put gel through it and keep it trimmed regularly.
You see, a hair dresser friend of mine once told me that "peoples hair are their crowning glory" and that the way that you keep your hair says something about you on a first impression.

That, my friends, was before i met mrs Meteor. 10 years ago, she was a plucky young student full of querky ideals -or as me and my buddies thought, she was mad as a bucket of frogs.
On realising that my hair had a bit of a wave in it, she demanded that i grow it beyond its regulation 2 inches to see how it looked.

In an attempt to woo the young Miss M, and despite being called a "tatty bastard" from many of my pals at the air force base where i worked, i perservered and cultivated the curly indie rock god mop you see below. I now call it "biker chic"!

From my earlier writings you will have probably guessed that mrs M rules the roost around my house. There are jelly fish with more of a backbone than me, and so the curly hair stayed. Afterall, she is always right. hmmmn.

However meteorites, i assure you that this fuel tank, the crowning glory of my Royal Enfield Meteor Minor, will not be under the influence of mrs M`s darth vader like rule.
As the most important visual feature of the bike, i intend to restore it to a state more polished than the pitch of a door to door encyclopedia salesman.
Read on...... 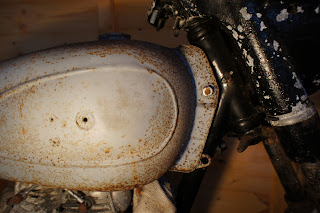 Stripping the Paint
Apparently Diamonds are supposed to be the hardest thing known to man. I think Clint Eastwood`s "Gunney Highway" in "Heartbreak Ridge" comes a close second

("i eat razor wire and piss napalm, and i can put a round through a fleas ass from over a 1000 yards").
Whatever. Somewhere high up on the hardenist list is Aluminium Sulphate, and a buddy of mine has an aluminium sulphate bead blaster at his work.
I gave him my rusty old tank, and let him go to work on it. A day later he handed it back to me blasted and then soaked in a strong chemical agent. Apparently the inside was dirtier than a tramp`s armpit at a mud wrestling competition

I was absolutely thrilled with the result see below:- 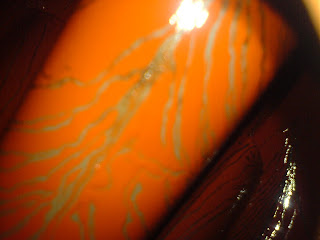 Although the Tapox had cured perfectly, it hadn`t seemed to key into the metal with the even coverage i had hoped for.
I was left with what i would describe as wrinkles of untreated areas which looked like a tigers scrotum!

I must admit i was a little disappointed. This was not the aircraft quality result that i expected and so I headed back down to Llandow classics to see what they thought.
To be fair, i was the first guy that they had sold this tapox stuff to, so they didn`t know what to expect either, however, the guy there said that  may be that the resin had dryed this way due to some residual contamination after the item had been soaked in a chemical cleaner. To be honest i think he`s probably right.
I`ve used enough dodgey chemicals in my time to know that some cleaning agents definately leave a film of chemical residue behind after cleaning. Hey, you live and learn.
Besides, the guy reckoned the tank was in pretty good nick anyway and the tapox had covered enough to do its job, particularly at the most vunerable rear end where they are prone to rust.

He advised me to maybe inhibit the tank by maybe pouring in a bit of diesel to keep it free from any moisture damage and i went on my way. reasonably satisfied.

Well meteorites, xmas is coming, the goose is getting fat, and so is mrs m`s belly- only two weeks to go and  i absolutely can`t wait!
i did broach the idea of Enfield as a middle name, but she told me that i needed to get a life.
If the meteorite hasn`t arrived by xmas, she has promised to helped me out with all the extra furnishings i need to finish the tank off as a xmas present such as the badges and petrol tap etc.
hopefully, i`ll get one more blog in by then, but part 2 of the fuel tank will be coming sometime in the new year. if not have fun over the xmas period.
Meteor Man
Posted by Meteor Man at 11:11